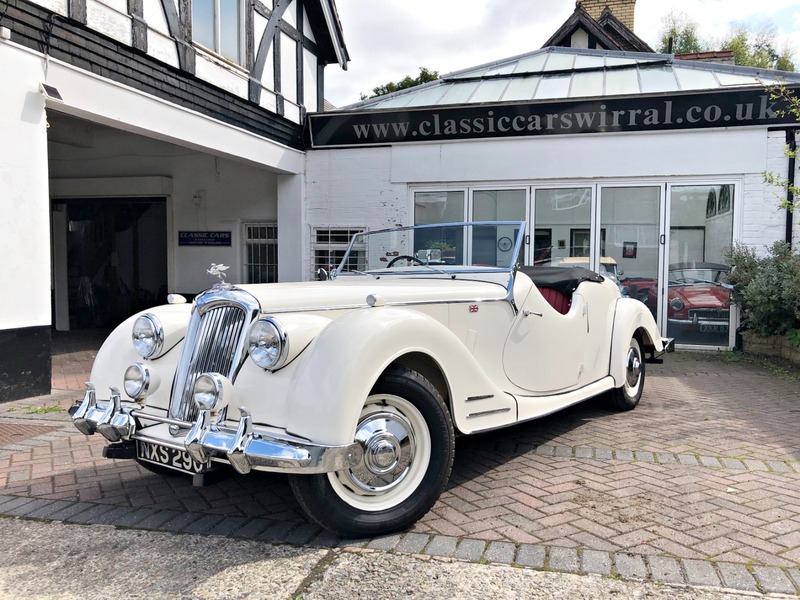 For sale here is a super rare 1951 Riley RMC.
This car has just completed a complete ground up restoration by its very patient but very skilled previous owner. One may ask where you find another one!!
Superbly finished in its original colour of White with contrasting Red leather interior. Every item on this fabulous car has either been renewed or refurbished, wiring harness, chrome, engine, chassis etc etc..
Still retaining its original features such as the 4 over riders per bumper, its 'pork pie' rear lights, folding windscreen, bench seat allowing 3 across seating
Powered by Riley's 4-cylinder 2. 5 litre straight 4 twin cam engine

The RMC (Roadster) was an open 2-door, single bench seat, 2/ 3-seater version of the RMB, with a large rear deck area and fold-flat windscreen. Announced in March 1948, it was delivered to Geneva just too late to be exhibited at the Geneva Motor Show. Primarily designed for the North American export market, it was normally built with left-hand drive, with the gear change lever on the steering column. The bonnet and radiator were lowered, and the bonnet catches were arranged to be operated internally. Extra over-riders were fitted to the bumpers and the fuel tank was enlarged to 20 imperial gallons (91 l; 24 US gal).
Eighteen months later, in September 1949, Riley announced future production would include a small quota of cars with right-hand drive. Riley attributed that to a slight increase in the supply of steel.
Instead of side windows it was supplied with flexible celluloid-glazed side curtains with a hole for hand signals and, when deployed, flimsy synthetic roofing over a light metal frame. It shared that car's 2. 5 L 100 hp (75 kW) engine and could reach 100 mph (160 km/ h).
Just over 500 were built from 1948 until 1951.
There are some RMC's out there that did not start life as such and have been converted, this is an original right hand drive car which makes it all the more rare.
New soft top and side screens included.
I am sure the first person that is in the market for such a car once they cast their eyes on this gorgeous car will fall in love with it.

Classic Cars Of Wirral Ltd are a credit broker and not a lender. We are Authorised and Regulated by the Financial Conduct Authority. FCA No: 666893 Finance is Subject to status. Other offers may be available but cannot be used in conjunction with this offer. We work with a number of carefully selected credit providers who may be able to offer you finance for your purchase.
Registered in England & Wales: 4310285
Registered Office Address:
19 Manor Hill
Prenton
Merseyside
CH43 1UG
UNITED KINGDOM
Data Protection No: ZA341743