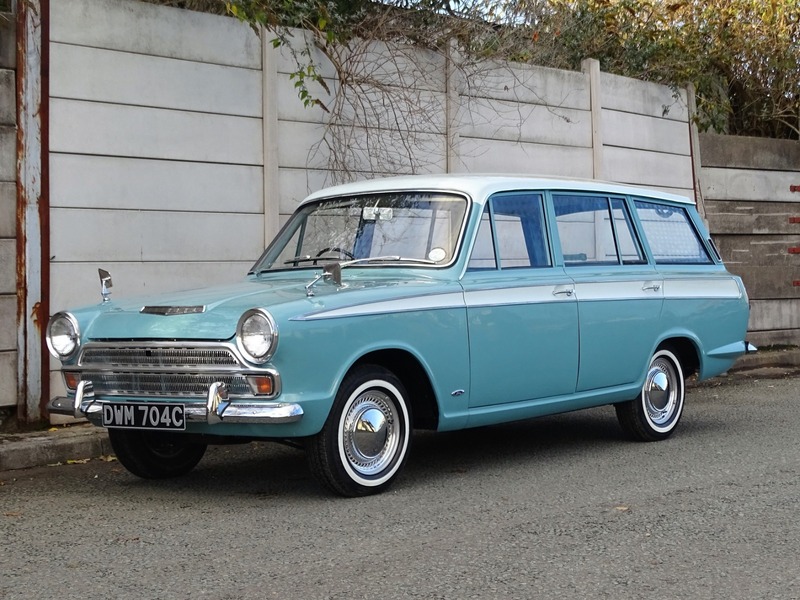 First registered as 'DWM 704C' by Southport County Council on 16th December 1965, this exceptional Cortina MK1 Estate had its last ever tax disc issued by the same authority some twenty-four years later. Unearthed by the vendor following three decades' dry storage, the Ford amazingly showed no sign of welding repairs to either its floorpan or inner sills. Stripped to bare metal as part of an extensive restoration which we feel would have cost far more than the guide price if carried out on a commercial basis, the five-seater had attention paid to its bodywork, interior, mechanicals and electrics. Refinished in its original livery of Glacier Blue over Ermine White with Blue upholstery, the Cortina MK1 is worthy of close inspection and indeed is the nicest example of its kind that we have encountered. Surviving Estates are few and far between but finding one with the larger 1500cc engine and Deluxe trim package is decidedly unusual. Starting readily upon inspection and behaving well during our recent photography session, 'DWM 704C' has yet to be run-in / debugged after its rejuvenation. Given the car's general state of preservation and lengthy hibernation, it seems likely that the current odometer reading of 54,900 miles represents the total covered from new (though, this figure cannot be warranted). A potential show winner not to mention a great family classic, this fabulous Ford is offered for sale with V5C Registration Document, owner's handbook, period brochure and sundry receipts.
Named after the Italian resort of 'Cortina di Ampezzo' which had held the Winter Olympics some six years earlier, the Ford Consul Cortina was unveiled in September 1962. Concealing a lightened version of its Classic sibling's sub structure beneath bespoke exterior panelling, the newcomer was equipped with MacPherson strut independent suspension, a leaf-sprung 'live' rear axle and four-wheel drum brakes (though, front discs were later standardised). Intended to offer class leading accommodation and economy, the Cortina was initially powered by an 1198cc OHV 'Kent' four-cylinder engine allied to four-speed manual transmission. Developing some 48.5bhp @ 4,800rpm, it was reputedly capable of 78mph and 29mpg. Usefully more powerful, a larger 1498cc OHV unit became optional within months. A strong seller, the Ford could be had in two-door, four-door or estate guises and with a variety of engine and trim options. Revised for October 1964, the Cortina lost its Consul prefix but gained a heater and screen washers as standard not to mention the much vaunted 'Airflow' ventilation system and improved interior trim. Mk 1 production ended in late Autumn 1966 after an impressive 1,010,090 cars had rolled off the assembly line. However, as the model nears its 60th anniversary the number of surviving examples ' especially estates ' is surprisingly small.
'¢ Recently emerged from a 'bare metal' restoration having been off the road and dry stored since 1989
'¢ Exceptionally rare survivor that retains its original, welding-free floorpan and inner sills
'¢ Believed but not warranted to have covered 55,000 miles from new
'¢ Mechanically overhauled, repainted, re-trimmed, refurbished brightwork etc
'¢ Due to be MOT tested for the first time in decades ahead of the auction
'¢ History file contains numerous parts receipts for the renovation plus an original brochure etc
'¢ The nicest example we have encountered. Go find another!

Classic Cars Of Wirral Ltd are authorised and regulated by the Financial Conduct Authority, FRN: 666893. Finance Subject to status and income. Written quotation on request. Other offers may be available but cannot be used in conjunction with this offer. We act as a credit broker not a lender. We work with a number of carefully selected credit providers who may be able to offer you finance for your purchase. We are only able to offer finance products from these providers
Similar VehiclesView all

Classic Cars Of Wirral Ltd are a credit broker and not a lender. We are Authorised and Regulated by the Financial Conduct Authority. FCA No: 666893 Finance is Subject to status. Other offers may be available but cannot be used in conjunction with this offer. We work with a number of carefully selected credit providers who may be able to offer you finance for your purchase.
Registered in England & Wales: 4310285
Registered Office Address:
19 Manor Hill
Prenton
Merseyside
CH43 1UG
UNITED KINGDOM
Data Protection No: ZA341743